With it's soft mellow tones and ease of playing (end  blown like a recorder) ,this is a great flute for anyone who does not want to put in the "hard yards" required to learn to play a flute  like the shakuhachi or transverse flute.                                                                         Anyone who has breath and fingers can play this flute !!
Once you can cover all the holes cleanly its just a matter of relaxing  and enjoying.Letting go of the judging, evaluating mind and allowing the inner music to flow.
Traditionally used in courtship by some American Indian tribes and sometimes referred to as a love flute , the sound of the Native American flute being conducive to a relaxed, "dreamy" space. (Scroll down to hear  flutes.)

Tuning to a minor pentatonic scale means that all notes seem to "fit".It is a very mellow scale,making these flutes an ideal aid in relaxation or meditation.
Pentatonic scale is the most common scale found throughout the world.
20th century German composer Carl Orff described it as children's native tonality .It is also  commonly used  in Steiner schools  in early childhood  musical  development.
I make these flutes in the key of D, C ,A, G ,and E .....D being the highest and E the deepest sounding flute...
The flutes have five holes to cover the full pentatonic scale and a higher octave can usually found on the lower couple of notes by blowing with a sharp forceful burst...
The fipple (or bird ) on these flutes (see photo below) is made of curved bamboo to give the flute a streamlined  outer edge making easy to pop into a bag or backpack. It is tied on with elastic cord (usually red or black)with beads attached .
The D , C, and A flutes are all a good size for a child or anyone with small hands .The G and E flutes can be played by most adults though the distance between the holes on the E  may be a stretch for some. Email me for details if required.
The deeper flutes(G, E,) have four holes in front and a rear hole played with the thumb.The higher flutes (D, C, A,)may have 5 holes in front or 4 in front and a rear thumb hole.
Watch the youtube video below to hear one of my Native American flutes in E being beautifully played by  Merriln Air from South Australia.
To see more of Merrilyns music videos (treehousemusic )  click  on          http://www.youtube.com/user/treehousemusic2008/videos

These bamboo Native American Style flutes have a similar tone and sound  to the wooden ones and are great for  anyone wanting to begin their flute playing career.
Note: I can also make these flutes in available in all keys in the diatonic scale.
I also make six hole flutes in all keys.  Email me if this is required.
All flutes  are guaranteed not to crack or get borers .Your money will be  refunded if you are not happy with your flute  for whatever reason.
Note: See the video at the bottom of this page for basic flute maintainence and placement of the fipple ( or bird ) after it has been removed  . 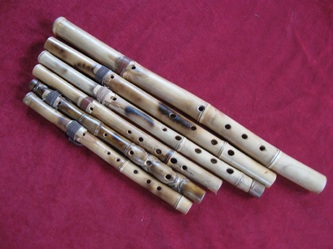 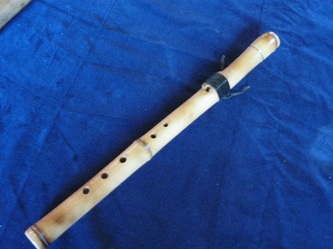 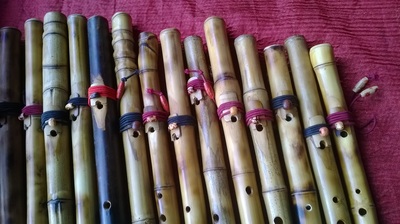 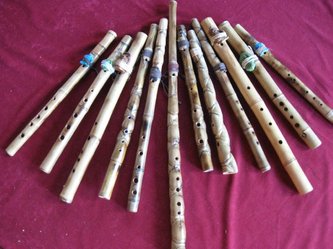 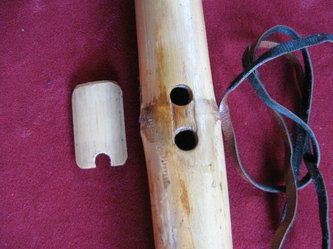 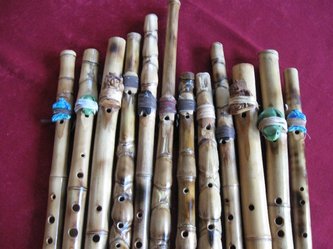